UltraSystems Environmental is starting an exciting new project, this time with the City of Jurupa Valley. Previously farmland, the City of Jurupa Valley is the most recently incorporated city in Riverside County. Since its founding in 2011, Jurupa Valley has sought to build a “Community of Communities”. During this time, growth and development has been carefully considered by the City as it works to support its new vision through this project as an important piece of that effort.

Dubbed the District at Rubidoux, this project, replaces what was formerly known as the Emerald Meadows Ranch Specific Plan. In 2005, UltraSystems Environmental provided the Environmental Impact Report (EIR) for the Emerald Meadows project; however, the project was never developed and changes to the site over the last 17 years requires the preparation of a new EIR report. 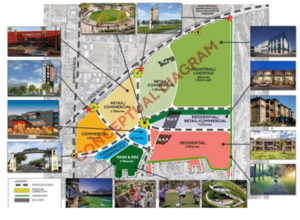 The District at Rubidoux is a master planned community that will occupy approximately 250 acres and incorporate retail, commercial and warehouse/logistics spaces, as well as, mixed-density residential areas, hospitality, recreation areas, and some dedicated open space. The District improves on the Emerald Meadows Ranch project by removing some of the allocated warehouse space and focusing instead, on resources that will support area residents. With this in mind, the District at Rubidoux has been carefully designed to bring new housing and community resources to the City of Jurupa. Walking trails will connect residents to the parks and other neighborhoods within the community.

The EIR provided by UltraSystems Environmental will look at the short-term and long-term impacts of the project on the environment for compliance with CEQA. Any required mitigation efforts will also be addressed and shared with the public.

About the City of Jurupa Valley

The City of Jurupa Valley is California’s newest city. Within a 10-minute drive of the Ontario International Airport, Jurupa Valley enjoys a location advantage unmatched in Riverside County.

UltraSystems, founded in 1994, is a multi-disciplinary, full service environmental consulting and planning firm serving both the public and private sectors. The 27-year-old firm provides expertise in development planning; site selection and analysis; CEQA and NEPA compliance; technical studies, and environmental compliance during construction. UltraSystems Environmental is certified as a WBE, SBE, DBE and WOSB company and is headquartered in Irvine, California.

Tina Freeman, MBA, is the Marketing Coordinator at UltraSystems working on social media, newsletters, and proposals at the Irvine Headquarter office.